What is Cyber Monday? 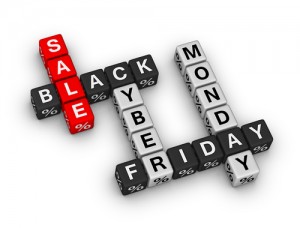 In the United States, the Monday following Thanksgiving has come to be known as “Cyber Monday”, and on this day, many retailers offer special sales prices and incentives such as free shipping to encourage people to buy online.

It is really a play on words.  First there was Black Thursday, the day following the US Thanksgiving holiday on which many stores offer amazing sales and promotions.  In my family, we gather around the TV to watch the people that line up in extremely long lines at popular stores, sometimes to save just 20%. Check out our home page: “get cash back on cyber Monday“.

We often here the explanation as follows: that many retailers operate in “in the red” for most of the year, then between Black Friday and Christmas they go “into the black”.  I believe this is an extreme exaggeration.  While many stores may make a large percentage of their sales during this time period, surely they would be bankrupt already if they were not making a profit the remainder of the year.  Black Thursday originally got its name in Philadelphia, where there was a heavy and disruptive traffic which would occur on the day after Thanksgiving.  But I believe, despite the exaggeration, that the first explanation is how most people think of Black Thursday today.

With the advent of the internet and online shopping, some clever marketing people decided to capitalize on the name “Black Thursday” and created “Cyber Monday.”  The purpose was to get people to shop online, and term was first used in 2005.  In 2013, Cyber Monday online sales hitting a record of approximately $2,290,000,000 (nearly 3 billion dollars).

According to Forbes,  2013 was the biggest Cyber Monday in history, up 18.2% from the previous year.  The news that surprised me in this article was that one third of the purchases were done on mobile devices (i.e. smartphones and/or tablets).  Last year, 80% of the mobile purchases were from apple devices, we will see if the Samsung/Android platform will pull up this coming year.

According to this beautiful infographic, the top 5 cities for the most onlin sales on Cyber Monday were: 1) New York City, 2) Washington DC, 3) Las Angeles, 4) Chicago, and 5) Atlanta.  Apple devices averaged $120.29 per order, and Android devices averaged $106.70 per order.   IBM reported that though shoppers spent 5 percent per order more on Black Friday this year, Cyber Monday online sales were up 31.5 percent over Black Friday.

Video about Amazon Shipping and Fulfilling on Cyber Monday